Handgun Metal Silhouette (HMS) shooting is a group of target shooting disciplines. You shoot at metal cut-outs representing game animals at varying distances. Metallic silhouette shooting can be done with airguns, black powder firearms or modern handguns. Depending on the specific discipline the shooter aims at targets such as chickens, rams, turkeys and pigs, which are cut to different scales and set at certain distances.

Metallic silhouette shooting dates back to the early 1900s, descending from an old Mexican sport where live game animals were staked out at varying distances as targets. By 1948 metal cut-outs were used instead of live animals, and the first metallic silhouette match was held in Mexico City. Because of its Mexican roots, in America the silhouettes are often referred to by their Spanish names: Gallina (chicken), Javelina (pig), Guajalote (turkey) and Borrego (ram). 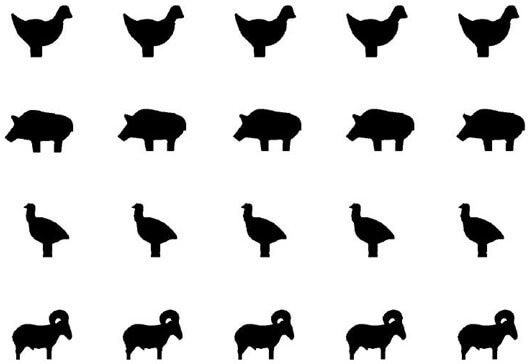 The targets are set up in groups of 5 of each kind at the required distances for the given match with a silhouette’s width between them. Each group must be shot from left to right; if a target is missed then the next shot is taken at the next target. Any target hit out of order is considered a miss. In order to score a hit, the heavy metal target must be knocked down or pushed off the target stand by the momentum of the cartridge, and even a shot ricocheting off the ground in front of the target will count if it takes down the correct one. Targets are engaged in order of distance: chickens, pigs, turkeys, rams. You’re allowed to have a spotter with you to watch where the shots land and advise you on corrections to make.

A tie can be broken in one of two ways: a knock-out shoot-off or reverse animal count. The former is used at all state, regional and international championships and for the overall match winner. Master class and AAA shooters would shoot at Turkeys, AA class shoot at Rams, A shoots at Chickens and B class shoots at Pigs. The reverse animal count (number of hits on hardest animal to easiest) is used to save time and effort: whoever hits the most Turkeys would be the winner. If a tie still exists, whoever hit the most Rams would be the winner. This would continue to Chickens and finally Pigs.

For IHMSA competitions, tie scores are broken by either reverse target count, or by shoot-offs, as determined by the match director. However, for state, regional and international championships, shoot-offs will be used to determine the winners in all categories and classes. For reverse target count, scores are compared starting at rams (the shooter with the most rams is the winner). This procedure is used sequentially down through turkeys, pigs and chickens. If a tie still exists, a shoot-off will be used to determine the winner. Shoot-offs will be in banks of 5 targets and can be any type or size, placed at any distance out to the maximum ram distance for the competition. Shooting strings will continue until all ties are broken. Knock-out shoot-offs are not allowed.

IMSSU is the international federation controlling metallic silhouette for both rifle and pistol competitions.

International Handgun Metallic Silhouette Association (IHMSA) is a USA-based shooting organisation. There are some minor differences between the international federation IMSSU’s rules and those of the IHMSA, but it is generally possible to compete in all with the same equipment. New Zealand shoots to both IHMSA and IMSSU rules.